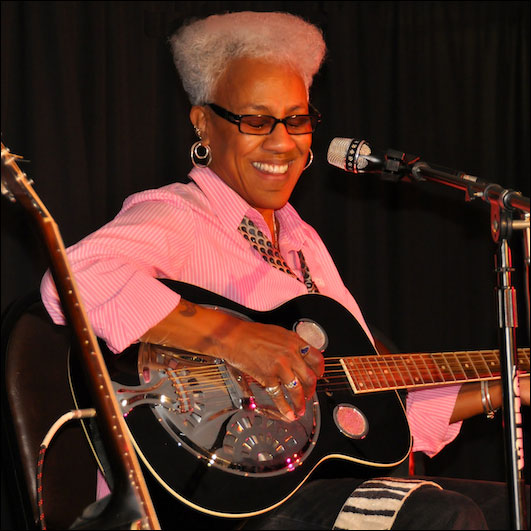 Gaye Todd Adegbalola, a Blues Music Award winner, is best known musically as a founding member of Saffire – The Uppity Blues Women (1984 – 2009). The group recorded exclusively with Alligator Records. Additionally, she has 6 recordings on her own label, Hot Toddy Music (Todd is her family name).

Gaye was born and raised in Fredericksburg, Virginia where she sat-in, picketed and protested its racism. She graduated as valedictorian of the then-segregated Walker-Grant High School, went “ up North” to Boston University to finish with a major in biology and a minor in chemistry. Prior to becoming a teacher, she worked as a technical writer for TRW Systems, a biochemical researcher at Rockefeller University, and a bacteriologist at Harlem Hospital. She has a Master’s degree in Educational Media (with a concentration in photography) from Virginia State University.

Prior to becoming a full time blues artist, Gaye was a science teacher in the Fredericksburg City Public School system for 18 years, and was honored as Virginia State Teacher of the Year in 1982. Throughout her teaching career, she directed Harambee 360º Experimental Theater —where she was able to creatively use performance as a tool to assist black youth in gaining confidence as they struggled with identity issues during the spread of desegregation.

During this same period, she nurtured her love of the blues. As a pre-teen, she had first heard live blues at a Sonny Terry & Brownie McGhee concert. This initiated her interest in Piedmont-style fingerpicking. As a young adult, Nina Simone led her to Bessie Smith causing her to fully immersed herself in the repertoire of classic blues women of that era. It was later in life that she picked up slide guitar.

Unable to get by on a teacher’s income, she began moonlighting in local clubs and her love of the blues soon grew into a full time career with Saffire – the Uppity Blues Women. She is very proud that they toured the world, brought many women to the blues and inspired many women to become musicians. Saffire ended in November, 2009, after making music together for 25 years.

She has won numerous awards including the prestigious Blues Music Award (formerly the W.C. Handy Award – the Grammy of the blues industry). Also of importance, in 2011 Gaye was named an OUTstanding Virginian by Equality Virginia for championing GLBT equality. Further, in 2012, she received the Parents’ Choice Gold Award for Music for her children’s CD, “Blues in All Flavors”. In 2018, she won the Kristin Lems’ “Social Change Through Music” Award at the National Women’s Music Festival. The Jus’ Blues Foundation honored her with the 2019 KoKo Taylor “Queen of the Blues Award” for preserving traditional blues heritage. Aside from her honors in music, The Library of Virginia recognized her as one of the 2018 Virginia Women in History Honorees (along with Barbara Kingsolver, Rita Dove and others).  As of 2020, she continues to serve as Vice President and works on the Political Action Committee of her local NAACP chapter.

She is an activist and has fought for social justice her entire life. In her songwriting she tries to provide a voice for those who have been marginalized by society. Yet, many of her songs are known for their biting humor. She does all of that and more on her weekly live program, “THE FRONT PORCH: Half Lit & Talkin’ . . . Schmack” archived on Facebook at Gaye Adegbalola-Musician. She is also in demand as a motivational speaker and a workshop presenter. By maintaining the blues tradition, she sees herself as a contemporary griot – keeping her history alive, delivering messages of empowerment, ministering to the heartbroken, and finding joy in the mundane. Her most recent CD released in January, 2019, is called “The Griot” and has received rave reviews.

Any bio needs to include that she is the proud mother of son, Juno Lumumba Kahlil. For additional information, please visit www.adegbalola.com and/or like her Facebook page, Gaye Adegbalola-Musician.

GAYE TODD ADEGBALOLA (pronounced A – DEG – BA – LOLA), Blues Music Award winner and a founding member of Saffire -The UppityBlues Women (1984-2009), plays guitar, slide guitar, harmonica and is a composer.  She has recorded 10 CDs on Alligator Records and has toured widely throughout the U.S.and internationally.  Gaye has also released six CDs on her own HotToddy Music label: “Neo-Classic Blues” with Roddy Barnes – mainly blues from the 1920s; “Blue Mama Black Son” – computerized originals by Gaye & her son, Juno; “GayeWithoutShame” – about GLBTQ issues; her Parents’ Choice Gold Award winning children’s blues CD, “Blues in All Flavors;”  “Is It Still Good toYa?”- mainly a cappella blues – by Gaye & The Wild Rutz; and,“The Griot” (pronounced GREE – OH) – topical blues for topical times.  A former Virginia State Teacher of the Year, Gaye is also in demand for workshops and lectures.  A long time activist, she continues to provide a voice for those who have been marginalized by society.  By definition of her life’s work, she is indeed a griot.